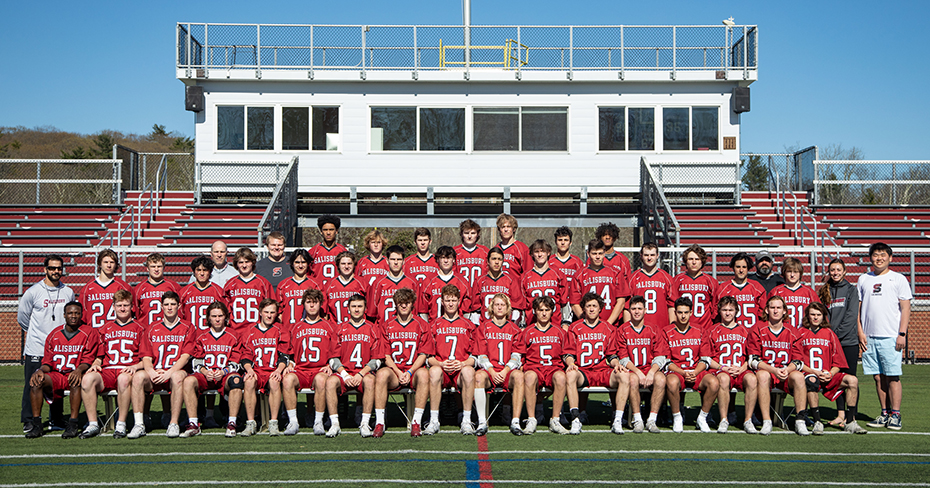 Tom is entering his fourth year on the Hilltop.  He is currently an Associate Director of Admission, the Director of Financial Aid, Chair of the Dorm Heads, and assistant lacrosse coach.

Tom is originally from the upstate New York area and is a graduate of Skidmore College. While at Skidmore, Tom captained both the hockey and lacrosse teams. He was a three-time All-American, Liberty League player-of-the-year, and earned Skidmore College’s senior athlete of the year award in 2006.  In 2011, Tom was inducted into the college's athletic hall of fame.

After coaching at both RPI and Bryant University, Tom spent 5 years at neighboring boarding school, Millbrook. There, he worked in both the admissions and college advising offices. Tom and his wife, Ana, live in Rennell House with their daughter, Teagan, and two labradors.

It almost goes without saying that the Salisbury Crimson Knights’ lacrosse team is awash in talented players. A tradition of excellence pervades the program. The number of commits to elite Division I college programs – 18 and counting – is impressive, to say the least. Head coach Tom Spinella has the further benefit of returning 15 players who were part of his team’s regular rotation last year.

As the profile of lacrosse continues on the rise across the prep school landscape and across the country, however, Spinella and his players are well aware that rival programs boast similarly stunning numbers. There are not many “easy outs” on the schedule. The Knights will face off against particularly strong teams from Avon Old Farms, Brunswick School, Deerfield Academy, Lawrenceville School, and Taft School all looking to flaunt and burnish national credentials.

For many schools, last year’s record of 7-4, compiled in one of the toughest high school leagues in the country, would have been considered a successful season. For Salisbury, though, a .636 winning percentage is regarded as a disappointment. It goes without saying that the team expects to improve on the results of a year ago.

Coach Spinella is optimistic. “I feel very excited about this year’s group,” he shares enthusiastically. “Their team chemistry is great, and they have bought into the notion of ‘something greater than themselves’.”

Since the late 1980s Salisbury lacrosse has enjoyed great success, evolving into one of New England’s elite programs. In 1994 and 1995, the team reigned as the Western New England Division II Champions under the leadership of coach David Hagerman. The team garnered even greater success in the years that followed. Under the leadership of coach Bobby Wynne, Salisbury lacrosse squads have reigned as champions of the Western New England Lacrosse League, earning the title seven times between 2003 and 2018. Our Knights also participated in the Geico National Championship in 2018. Many Salisbury boys have enjoyed great success at the nation’s elite collegiate programs.

Where Are They Now?